In 2005 the Trust expanded its work to include the ten Junior Schools in the TR15-16 area.  This scheme is known as the Fred Harris Education Award in honour of Mr F.L.Harris who spent his lifetime working in education. The Redruth Charity Trust were fortunate to have him as a Trustee from 1947 – 1990 during which time he held the posts of both Chairman and Secretary.

During the summer term, the Trust invites nominations of a Year 6 pupil whom teachers deem suitable to receive this award. The pupil should have a positive approach to life and make every effort in both their school subjects and extra curricular activities.

The successful pupil will receive £50 in book tokens plus a framed certificate. The school will receive a cheque for £250, which the Trust requires they spend on books for the school library.

The Chairman and a Trustee attend the schools’ end of year ceremonies in July to make the presentation.

Nominations for the 2020 Fred Harris Education Awards are now closed, and will be presented virtually to the Y6 winners during July. 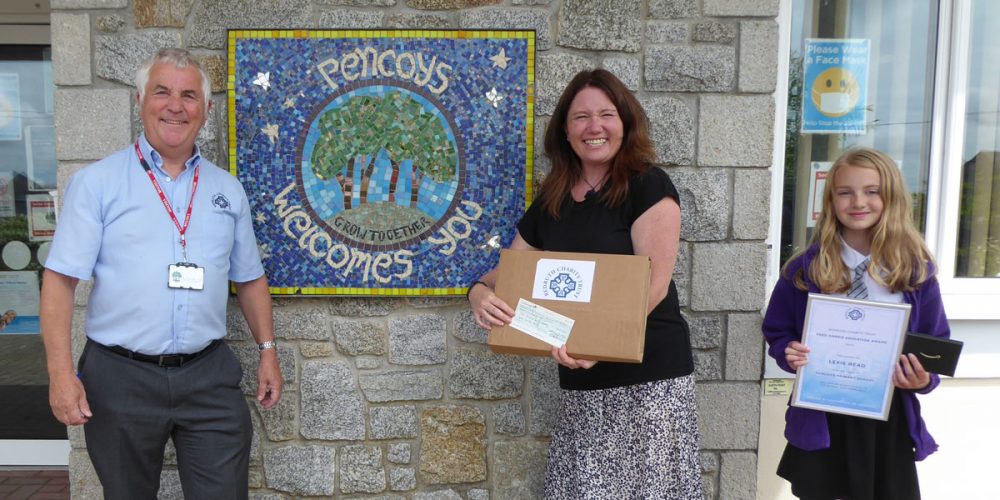 Redruth Charity Trust awards £4200 in its 2021 Education Awards The 2021 Fred Harris Education Awards returned to in-person presentations and included new collaborations with Amazon and Tor Mark books to enhance the package provided to schools. Trustees were thrilled to be able to return to visiting in person to announce the winners and present the library donations to the ten schools in the Redruth area, which took place in the final days of the academic year. Redruth Charity Trust awarded a £50 Amazon voucher to one Year 6 pupil in each of the town’s ten schools that has made a difference to their school and community, in honour of Mr F.L.Harris (Trustee 1947-1990) who spent his lifetime working in education.  The schools nominate their winning students. To the ten primary schools, RCT has made a donation towards their library provisions, between £150 and £450 according to the school’s KS2 pupil numbers. Thanks to the support of Amazon this year, in addition to the regular individual sponsors to the scheme, the Trust was able to enhance the 2021 cash donation with a collection of 19 Cornish books, obtained from Tor Mark Books, an established publisher based in St Day. Titles were selected to match in with curriculum topics. The Trust thanks Amazon Redruth Delivery Station, The Penventon Park Hotel, Dave Hendry Electrical, Julie Mitchell, Debbie & Colin Taylor, Patrick Orient, Alan & Sam Hailey, Graham Young, Wilf Alich, Sue & Nigel Pearce and Alan & Maxine Milliner for supporting the scheme. Chris Hailey, Chair of Trustees, said: “The Year Six students in our district have been impacted the most by this pandemic; cancelled school camps for two successive years, cancelled Christmas carol concerts, sports day without spectators, the list goes on. We were therefore thrilled that the restrictions lifted in time for Trustees to visit schools in person, and let them know how much we value their resilience and maturity, as well as applauding the ten students that have stood out as having made a difference during their primary years. Congratulations to all the winners. “The aim of the Fred Harris Education Award scheme is to support the schools to offer exciting and engaging reading material in their libraries, and our cash donations are always well received, but we were delighted to be able to enhance this with a collection of Cornish books from Tor Mark, the response to which was hugely positive. We hope that this collection, and the new material that our cash donations will buy, will make a difference to all students. “To welcome Amazon to the scheme this year meant a great deal to us, it’s recognition by a huge multi-national company of the Trust’s role at the heart of the community, bringing business and charity together to make a difference to more and more of Redruth’s residents every year.” The 2021 winners are: Isabelle GlazeTreleigh CP School Megan HannonLanner Primary School Kian KnuckeyCurnow Lower School Aimee WaltersIllogan Primary School Tristan DaveyTreloweth Primary School Lexie ReadPencoys Primary School Evie SkinnerPortreath School Kiera BuzzaPennoweth Primary School Sarah HoptonTrewirgie Junior School Georgina GummaSt Day & Carharrack Community School Kian Knuckey (Curnow)Lexi Read (Pencoys)Kiera Buzza (Pennoweth)Evie Skinner (Portreath)Isabelle Glaze (Treleigh)Sarah Hopton (Trewirgie) 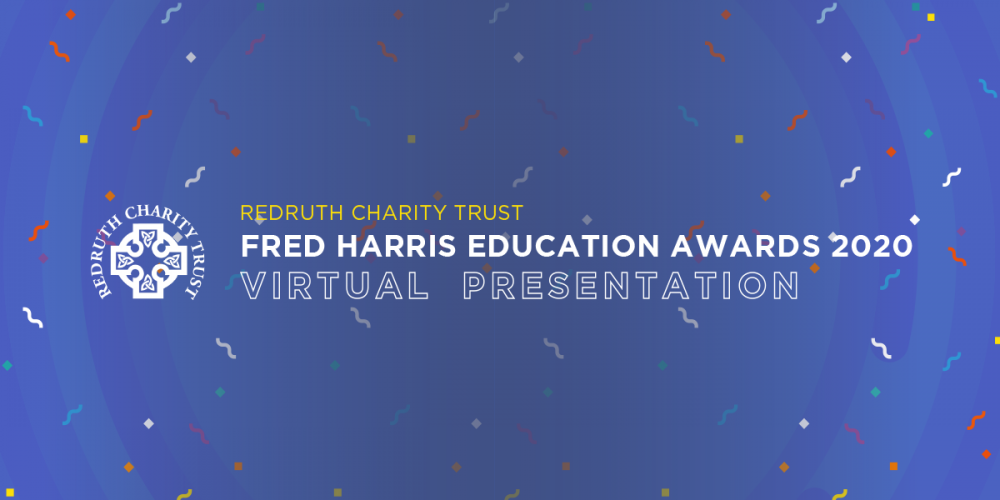 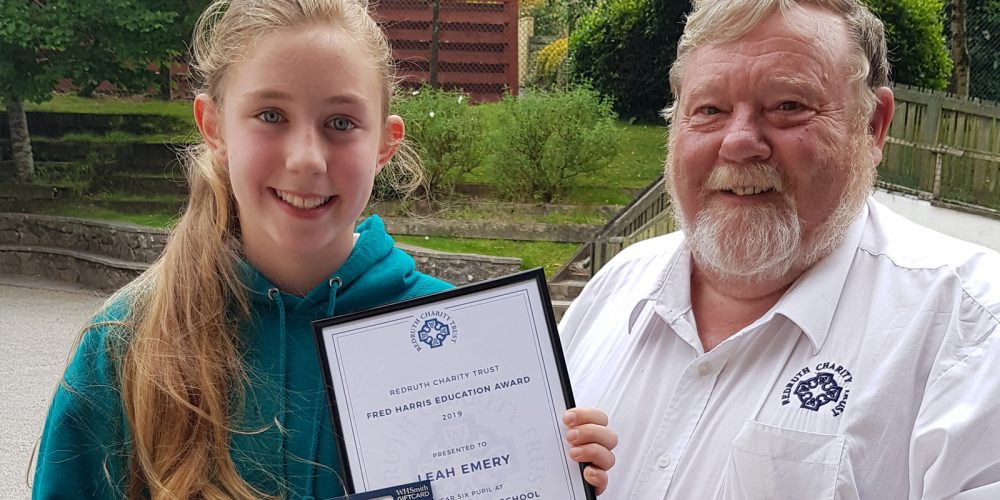 The 2019 Fred Harris Education Awards have been presented to the winning students in each of the ten schools in the Redruth area. Redruth Charity Trust awards a £50 voucher to one Year 6 pupil in each of the town’s ten schools that has made a difference to their school and community, in honour of Mr F.L.Harris (Trustee 1947-1990) who spent his lifetime working in education.  The schools nominate their winning students. The 2019 winners are: Treleigh C.P. SchoolSophie Pooley Portreath Primary SchoolEmily McKenzie Pennoweth SchoolConnor Whitmore Lanner Primary SchoolLeah Emery Illogan SchoolCharlotte Smith Trewirgie Junior SchoolFreya Crawshaw Treloweth Primary SchoolRenars Krinkels Curnow Lower SchoolRosa Hancock St Day & Carharrack Primary SchoolEvie Sharples Pencoys Primary SchoolKieran Helmer-Dunstan Charlotte Smith (Illogan) Leah Emery (Lanner) Evie Sharples (St Day & Carharrack) Freya Crawshaw (Trewirgie Juniors) Sophie Pooley (Treleigh) The Head Teachers of all ten schools were also presented with a donation from the Trust towards the schools’ library provisions. For 2019, the Trust was able to boost the donations for the larger primary schools proportionately, with a total value of £2900, thanks to an unexpected donation from the Penventon Park Hotel (read more). I just wanted to say thank you so much for the money that you donated to school once again this year.  As a school we are very grateful for the money that we are able to spend on our school library.  It remains very important to us that our children have access to quality reading and leisure materials and we will be spending the money that you gave this year on story bags for our children to explore. Sam Murray Assistant Head, Curnow Lower School