A giant size Cornish pasty, with his name in pastry baked upon it, has been sent to rugby legend Jonathan Davies OBE by Chris Hailey, Chair of Redruth Charity Trust.

The pair met recently when Davies, former Welsh Fly Half and rugby analyst, appeared as a guest at St Rumons Club in Redruth.  Cornish pasties were a topic of conversation as Jonathan said he would love a proper pasty.

Denzil Trevethick’s bakery in Redruth comprises a small team hand-making their traditional steak pasties to a family recipe.  Their Cornish pasties can now be sent to any UK destination by next-day delivery.  Six pasties were donated, plus home-made fudge, and sent to Swansea in Wales where Jonathan lives. 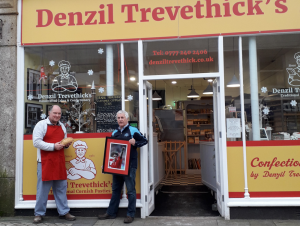 Pictured: Ian Trevethick, owner of Denzil Trevethick’s bakery, and Chris Hailey, Chair of RCT, outside the bakery in Fore Street with a framed Jonathan Davies print and a giant pasty.